The historical site of a national scale struggle against a nuclear plant project, the Carnet Island and its Bras du Migron are today, once again, a target for developers. To the east of Paimboeuf, in the village of Saint Viaud, the Port of Nantes-Saint Nazaire looks to develop 110 hectares of natural space one the banks of the Loire River. It’s goal: the creation of an industrial port zone dedicated notably to the renewable energy sector.

We, a collective formed following a festive weekend organized by the association Stop Carnet against the development project, have decided to occupy the entrance to the natural site since Monday, August 31st in order to stop the destruction that had started already for a few days.

We oppose the destruction of this zone, home to consequential populations of snakes, amphibians, and birds that thrive in this unique mosaic of dry prairies and reedbeds. We oppose the dredging of a quarter million cubic meters of sand from the Loire for the filling and concreting of 110 hectares of wetlands precious for the balance of the estuary’s ecosystem. This estuary that is our home has been changed, little by little for the last century, into a giant port channel. We oppose the uniformization of this zone whose beauty and ecological diversity has always stunned us.

And what of the ecological compensation? This question covers up the sham of green growth. The “compensation” would consist of compensating the destruction of 110 hectares by working on the remaining 285 hectares. What compensation is there to speak of? These measures are not only the commodification of the living and the natural milieus but also a farce in themselves.

Concerning the terms of the project, tied to renewable industries, we ask: how can we believe in a model that build itself on the ruins of the living world? In a model that presents itself as renewable but remains predicated on the extraction of precious metals and materials in the Southern Hemisphere? The industry we are told is green and environmentally conscious is nothing but a different shopfront for the same culture of the expropriation of natural space for the expansion of productive capacity for the capitalist economy.

We refuse the endless race of energy growth and we oppose the development pushed forward by energy multinationals with little input from locals.

The Carnet Island development project is one of 12 sites that the government had promised carte blanche access to for the private sector last January. Now there are 78 such sites devoted to massive reindustrialization. It is not only against this reindustrialization that we organize ourselves but also against the instrumentalization of job creation that the project promises.

Now that work has been started on the zone to extract the dangerous Baccharis plant after 10 years of project elaboration, our neighbors discover through our presence the planned industrialization and its consequences. This project, that foresees already 50 cm of sand backfilling will not stop submersions due to climate change-induced rising sea levels but will instead create yet another risk-prone industrial area in a region already very risk-prone. Storm Xynthia has already flooded parts of the site.

Our occupation of public land at the entrance of the Carnet Island is our last recourse for defending the reedbeds and their feathery, furry, and scaly inhabitants.

On this zone to defend (ZAD) we have in just a few days been able to build a collective organization attached also to combatting all forms of domination, especially sexism and racism. Here, you can find people from all different horizons and generations.

We demand the immediate stop to the development and the abandonment of the Carnet Island project.

We ask all locals not yet involved in the struggle to join us or to contact the organization Stop Carnet.

We also call on all energies available for this cause to join us or to help with material or media support.

We are the Loire that defends itself! 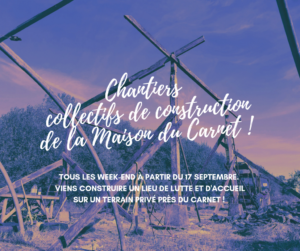